This captivating vast green garden by the Ping River was once a private residence of William Alfred Rae Wood or W.A.R. Wood, the first British consul in Chiangmai from 1921-1970. During his time in Chiangmai, he built three houses for his own use. The first house is currently the Le Coq d’Or Restaurant, the second house is the one behind The Consul’s Garden, our new phase, and the last one is on the other side of the garden next to an enormous Raintree that was planted by both he and his wife. The tree is now more than 100 years old.

After W.A.R. Wood passed away, his wife decided to go and live with her children in England, so she sold this piece of land to one British businessman. The three houses full of memories and in the same condition were passed onto the new owner. Later on, Le Coq d’Or restaurant was established in 1973. Le Coq d’Or, in French, means Golden Rooster, which is the birth year of the founder.

Le Coq d’Or was established because at that period of time, there was no French restaurant in Chiangmai, but Mr. Alan Telfer was craving for French food, so he decided to open his own French restaurant. The menu at Le Coq d’Or was inspired by the traditional French cuisine. Each dishes therefore are delicately crafted to create perfection in taste and presentation. The services as well, need to be outstanding and up to his standard. 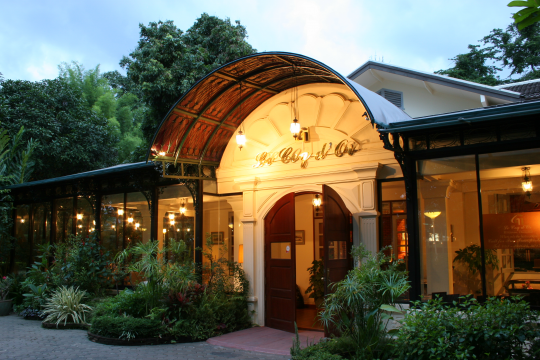